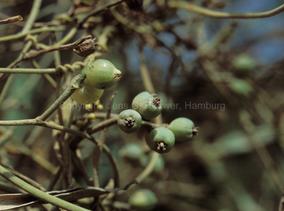 Obligately (hemi)parasitic twiner.  Shoots with haustoria.  Leaves alternate, minute, scale-like.  Inflorescences mostly spicate, occasionally racemose, rarely branched or capitulate.  Flowers bisexual, trimerous.  Tepals very unequal, the outer ones much smaller, similar to the bract and bracteoles subtending the flower.  Fertile stamens usually 9, rarely 6, then the third or the second whorl sterile, stamens of the third whorl with a pair of glands at the base.  Anthers 2-locular, often with lateral flanges at the base, in the two outer whorls introrse, in the third whorl extrorse.  Staminodes of the fourth androecial whorl usually well-developed.  Ovary at anthesis superior on a shallow receptacle, which becomes deeply urceolate after anthesis.  Fruit consisting of a fleshy receptacular tube completely enclosing the ovary, usually crowned by the persistent tepals.

About 20 species; 14 in Australia, three in Africa, three or four in Asia, one pantropical.

Cassytha looks strikingly similar to Cuscuta (Convolvulaceae), but its trimerous flowers with anthers opening by valves leave no doubt that it belongs to the Lauraceae.  The color of the stems apparently changes with the environment.  Even in the same plant stems in the shade tend to be deeply green, whereas stems in full sun look whitish, yellow, or even orange.