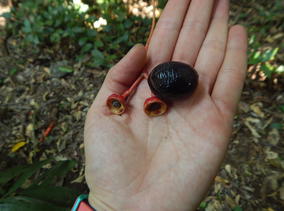 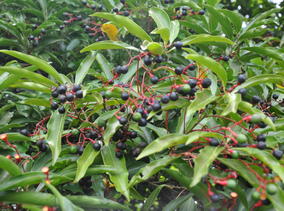 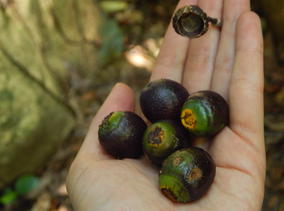 Flowers trimerous, bisexual, 3-17 mm in diameter.  Tepals 6, equal or the inner 3 slightly smaller, united at the very base (usually falling off as a ring after anthesis), papillose on the adaxial surface, usually brilliant white.  Fertile stamens 9, in 3 whorls, subsessile or with distinct filaments, filaments pubescent, anthers transverse-elliptic, roundish-rectangular or trapeziform, never with a triangular, sterile apex, the outer 6 equal, sometimes slightly adnate to the tepals, introrse, the inner three different in shape, with a pair of glands at the base, extrorse or latrorse.  Anthers 4-locular, pollen sacs arranged in a horizontal arc, rarely almost in two superposed pairs.  Staminodes of the fourth androecial whorl usually distinct, often apically glandular on adaxial side, with pubescent filament.  Receptacle small, scarcely enclosing the ovary.  Ovary superior.  Fruit ellipsoid to globose, usually black or brownish purple at maturity, subtended by an often red receptacular cupule.

Mainly in Central America and the Antillae, with one species extending far into western South America.  About 20 species.

Damburneya is usually recognized by perfectly rotate, brilliant white flowers.  The tepals are usually distinctly papillose on adaxial side, as if they were covered with frost.  After anthesis, they fall off as a ring, together with the stamens and staminodes.  The four pollen sacs of the anthers are arranged in a shallow arc or almost in a horizontal row.  All these characters are shared with Nectandra, and therefore Damburneya had been included in Nectandra for a long time, until Trofimov et al. (2016) have shown that it forms a different evolutionary lineage.  In contrast to Nectandra the species of Damburneya have pubescent filaments, never a clearly scalariform leaf venation, and no triangular anther tips.